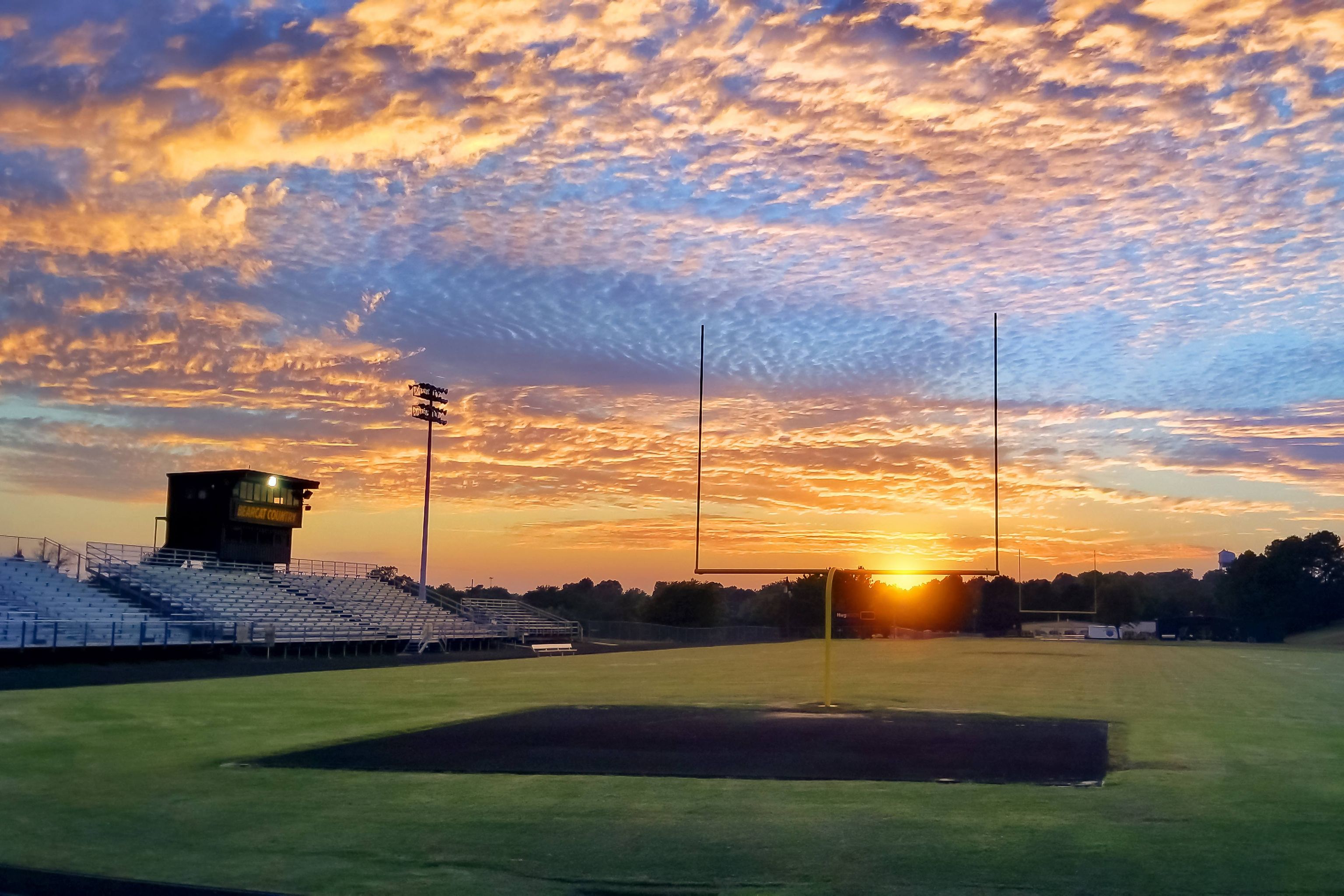 The summer before the 2017 football season, which would be the 50th in which Booneville High School called Bearcat Stadium home, a committee of former players and coaches and a longtime media representative was tasked with creating a list of the 50 greatest games at Bearcat Stadium.

If created today, just four years later, there is little doubt some games on the original list would be bumped in favor of some of the thrillers played inside the Home of Champions since the list was compiled.

For example, the 2017 playoff game when there was a last second field goal to beat Nashville or the goal line interception in a 2018 playoff game that got the Bearcats to a title game, or the fourth down goal line stop to preserve a playoff win over Osceola last season.

Stout defense, as much as the firing of the canon, has long been a staple in Bearcat Stadium since the start. Literally, since the very beginning.

It was the fall of 1968 when the Bearcats, then under the direction of Gene Bradley – the driving force in seeing the stadium built – christened the new field with a 27-0 win over Charleston.

Thus Charleston’s 1968 Tigers became the first shutout victim of what is now a 77-member club.  While that number is impressive enough considering the stadium’s now 53-year existence, making it more impressive is contrasting it with the total of just 60 losses.

The school most often to visit and leave with a zero on their side of the scoreboard is Subiaco with nine such meetings. Clarksville and Mansfield are both next having lost by a shutout seven times.

The 77 shutouts are part of a total of 259 Booneville wins at Bearcat Stadium. With 23 losses to Bearcat teams through the years, Waldron is the opponent who has accounted for the largest part of the total. Clarksville comes in second with 21 losses followed by Mansfield with 17, and Paris and Ozark at 16 apiece.

Mansfield is one of two schools who have lost more than 10 times in Bearcat Stadium without recording a single win. Subiaco is the other with the Bearcats compiling a 15-0 record against the Trojans in the stadium. West Fork comes in at third with an 0-7 record in Booneville.

That means of course, on average, a playoff game is held every season at Bearcat Stadium. The 2020 Bearcats won two games at home in the playoffs, marking the ninth time that has happened.

All told the Bearcats are 44-13 in playoff games at Bearcat Stadium. That’s a winning percentage of 0.772.

Although it has been around for 53 seasons now, there have only been five different head coaches on the home sideline for a senior high game – Bradley, Doug Scheel, Kenneth Rippy, Scott Hyatt, and Doc Crowley.

Bradley’s teams won 50 times before he said goodbye after the 1980 season; Scheel’s teams won 46 times in his nine years; Rippy led Bearcat teams to 89 home wins over 17 years; and Hyatt’s clubs won 67 times over 13 years. In his first year as head coach Crowley’s 2020 team was 7-0 at home.

So You Won A Title

Of course there have been a few seasons in which the Bearcat record at home was below .500, but there has never been a season in which the Bearcats did not win a game at home. The last, really only close call came in 2015 when a 2-6 team that had been 0-4 at home beat a defending state champion Charleston team 39-32.

Actually that was the second time a defending champion had to visit Bearcat Stadium the year after hoisting a trophy, only to go home with a loss. The other was Mena in 1977, 22-6.

These days when the Bearcats enter the field for pregame exercises virtually the entire city, and quite a bit of the surrounding limits, are well aware because of “the canon”, positioned in the northwest corner of the stadium.

At one time that was also the sound folks in town would hear when a Bearcat scored a touchdown and they could often tell how the game was going by the canon count. Through the years scoring touchdown plays have been followed by a firework splash that would be a highlight of most July Fourth celebrations. Of course by the end of a high scoring games, Bearcat faithful have been treated to a show of sorts.

The canon has been duplicated at other, newer, stadiums in the area and the firing cylinder was even once unearthed and stolen by, apparently, opposing fans due to make a trip into the stadium that week. In that instance a new launching chamber was inserted and the explosives were projected skyward for the game that night. It was a win.

While not technically an upgrade, the installation of an improved “canon” is just one one of many Bearcat Stadium enhancements. ‘

The eldest of the facilities in use by the Booneville School District has undergone pressbox and bleacher expansions, PA system upgrades, the addition of a concrete walkway complete with lawnchair pads, various scoreboard and play clock changes, a rebuilt concession stand/ticket booth, a new track, and the addition of a visitor’s side pressbox.

Also, when Bearcat Stadium opened the fieldhouse was located on the western end of the stadium grounds.  By 2000 that facility had served its purpose and had largely been outgrown leading to a campaign for a new fieldhouse which was built adjacent to a practice field and overlooking the Home of Champions.

In 2007 that facility was named for Ken Rippy, who had played in the first game and, again, served as the head coach for 17 seasons and 89 wins in the stadium.

After his passing in 2015, the pressbox was named for Donal Elmore, a long time public address announcer and the man who is credited with coining the still uttered opening phrase “Welcome to Bearcat Stadium, Home of Champions.

Before the season opener in 2018 the playing surface at Bearcat Stadium was formally renamed the Doug Scheel Field on a night of a Bearcat shutout win that was the first on a single season high of nine wins in the stadium that year.

The field bearing Scheel’s name is, as was the case when Bradley’s first team took it, the traditional grass surface.

Also in 2018, the street bounding the east end of the complex, formerly Tenth Street, was renamed D.J. George Drive in honor of the long time super fan and former teacher with the school district.

While Bearcat football is the featured use of the stadium, it is not it is not the only time the gates are open. Bearcat Stadium is also home to the junior high and seventh grade teams through the school system, as well as the youth sports programs.

Track teams also utilize the stadium, hosting three levels of Bearcat Relays each year – including being one of the last meets before the COVID-19 pandemic shut down most spring sports in 2020.

Seniors typically also lose to the faculty members on a softball field fashioned on the field each year.

Bearcat Stadium is also the desired host of high school graduation and even expanded to hold the kindergarten graduation and would have hosted a sixth grade graduation last year, had the weather not prevented plans to do so.

Outside of the school district other uses include hosting the city’s annual firework show on or near July 4th each year, an Easter egg hunt, and more.

Fan bases scheduled to make their way to Bearcat Stadium this season will hail from Ozark, Two Rivers, Danville, Baptist Prep, and Paris.  Combined the schools have lost 41 times inside Bearcat Stadium.